From the Bethlehem Globe Archives 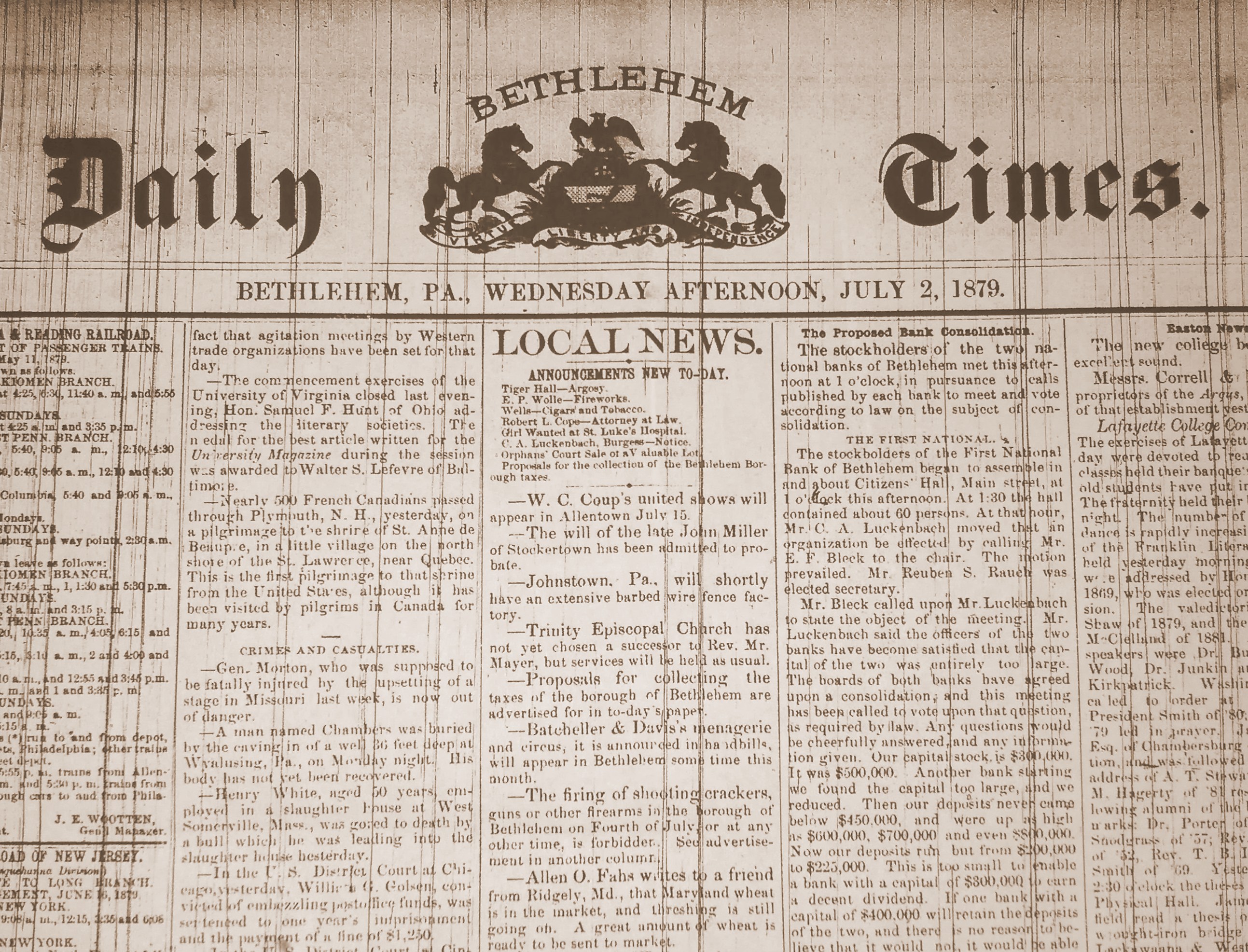 Stories From The Bethlehem Globe Archives

“Some time during Saturday night jokers placed a cowbell in the cupola on H.G. Borhek’s new stable on Raspberry Alley, and the same was rung furiously at an early hour yesterday morning.”

The blowing of the steam whistle at the water works early in the morning is complained of as a nuisance.  The people annoyed ask whether the fire committee cannot select a later hour for the test.  The same object would be accomplished, and people, particularly those in the vicinity of the water works and along South Main street, would not be scared out of their beds and wits at the same time.  Good sense and good feeling, they say, both would seem to incline the whistle blowers to please the public in this matter.

On Wednesday evening a party of young men, numbering 10 or 12, proceeded to the canal, at a point opposite the Lebanon Furnaces, and divesting themselves of their clothing, jumped in and enjoyed the luxury of a good swim. They had placed their garments at the foot of the cinder bank, and, unfortunately for them, while sporting in the water, the workmen employed at the furnace dumped a truck of live cinder down the embankment, destroying every vestige of the wearing apparel deposited there by the bathers. This was a decidedly unpleasant fix to be in, but what can’t be cured must be endured, and so our aquatic friends were obliged to take up their line of march for home in a rather light and airy costume. A dark night and numerous alleys and by-ways served them admirably in their retreat.

A Market Street woman, near High, during the storm last evening, awoke her husband and said: “I do wish you would quit snoring, for I want to hear it thunder.

Wanted His Wife – A wrathy husband was out on Church Street, last evening, in the neighborhood of High, looking for his wife, who he declared had run away with some young men. Promenaders out that way were subjected to close scrutiny by the irate wife-hunter, and more than once he had to explain his impertinence.

The Firemen’s Dog “Smoke”  – Almost every person in the Bethlehems has seen and knows more or less about “Smoke, the firemen’s pet dog. The “Persy” boys in particular are very fond of the canine, and take great pride in exhibiting him on such occasions as department parades, on which events “Smoke” is in his glory. The dog is fed and taken good care of by residents in the northern end of town.  Among the dog’s admirers is Henry Fenstermacher, Salesman at S.A. Solt’s store, Broad and Centre streets.  The dog is greatly attached to him. Early every Friday morning Mr. Fenstermacher takes a trip into the rural districts after fresh butter.  On the first several trips he took “Smoke” along with him.  Since then, on every Thursday evening the dog comes to the store – and it is impossible to drive him away – where he waits patiently for Mr. Fenstermacher to go home for the night.  The dog accompanies him, and at daylight next morning arouses him by barking.  He then appears to be delighted, and after the team has been hitched up will leap into the wagon and take his accustomed place alongside of the driver, where he remains through the trip.  Strange to relate, “Smoke” never comes around the store to stay except on Thursday evenings, and in the past ten weeks has reported promptly.